On her desk sits a sign that says “Never, never, never give up.” There could not be a more fitting sign for Cassie Mitchell to have on display. A former track star with dreams of becoming an orthopedic surgeon, Mitchell is now an assistant professor in Georgia Tech’s Wallace H. Coulter Department of Biomedical Engineering and the Machine Learning Center at Georgia Tech. She is also a Paralympic medalist. It’s not exactly the path she would have chosen herself, but she’s proud of it.

From Cowgirl to City Slicker

To many of Mitchell’s friends and family back home in Oklahoma, she is an “animal whisperer.” She always seems to know what to do with animals, including calming down a 2,000-pound bull, which is a gift even more amazing to behold now that Mitchell is wheelchair-bound quadriplegic.

“I think it would surprise people to know that the girl spinning around in a wheelchair, looking at multi-factorial diseases in a lab in a big city, is the same girl who grew up competing in goat-tying, barrel racing, and pole bending,” said Mitchell laughing.

As a teenager Mitchell rehabbed a retired racehorse and together the duo won five world titles in equine events, the first of many sports world titles that Mitchell would claim. 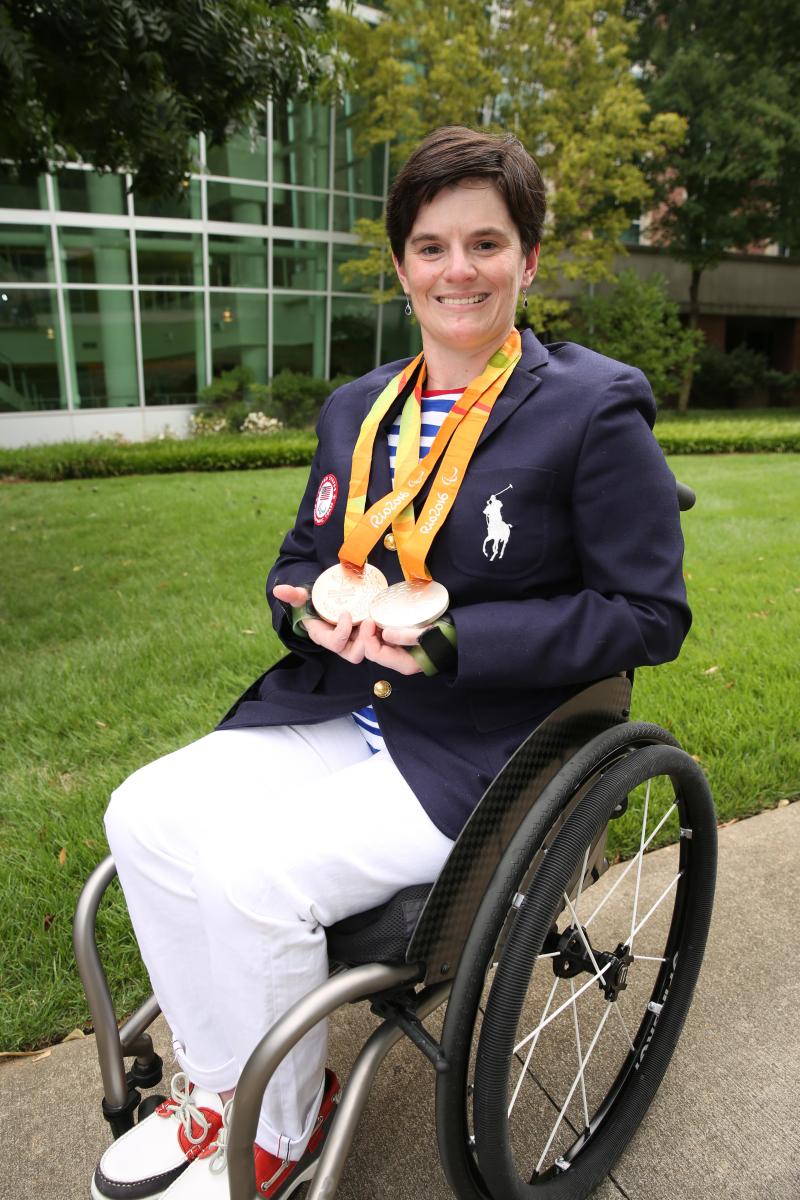 Wearing her opening ceremony outfit from the 2016 Rio Paralympics, Mitchell proudly displays her silver and bronze medals. She's planning on bringing home the gold at the 2020 Paralympic Games in Tokyo.

The Moment That Changed Everything

At age 12, Mitchell started to experience double vision and blurred vision. After waking up paralyzed at the age of 18, the track scholarship student was diagnosed with neuromyletitis optica – more commonly known as Devic’s disease. Overnight, Mitchell saw her dreams come crashing down as the disease left her paralyzed from the neck down and with permanent double vision.

“I lost my track scholarship, and my dreams of becoming an orthopedic surgeon just vanished. That was really hard,” said Mitchell.

Though her athletic scholarship was gone, Mitchell had graduated valedictorian of her high school and was offered an academic scholarship to Oklahoma State University.

It was during an advising session that she chose engineering.

“Being from a small, rural town. I had no idea what engineering was. They suggested it to me because I had tested really high in math and science, so I was like cool, that sounds good. Then I had to choose between electrical, chemical, and mechanical - biomedical wasn’t even an option then - and I picked chemical because I enjoyed chemistry. That’s how I became an engineer,” said Mitchell.

After graduation, Mitchell worked for ExxonMobil in reservoir modeling, but medicine was always calling her name. A few years later, she decided to earn a Ph.D. and applied to three schools with three very different programs.

She eventually chose Georgia Tech and Emory University’s dual Ph.D. program in biomedical engineering, a choice that stemmed from her own personal experience and her new goals.

“Looking back, I can see the writing on the wall that was pointing the doctors to Devic’s disease. But in the middle of all of it, it was so hard to pair different symptoms together. I’m hoping that my work in predictive medicine will make patient care better, leading to quicker, more accurate diagnoses.” 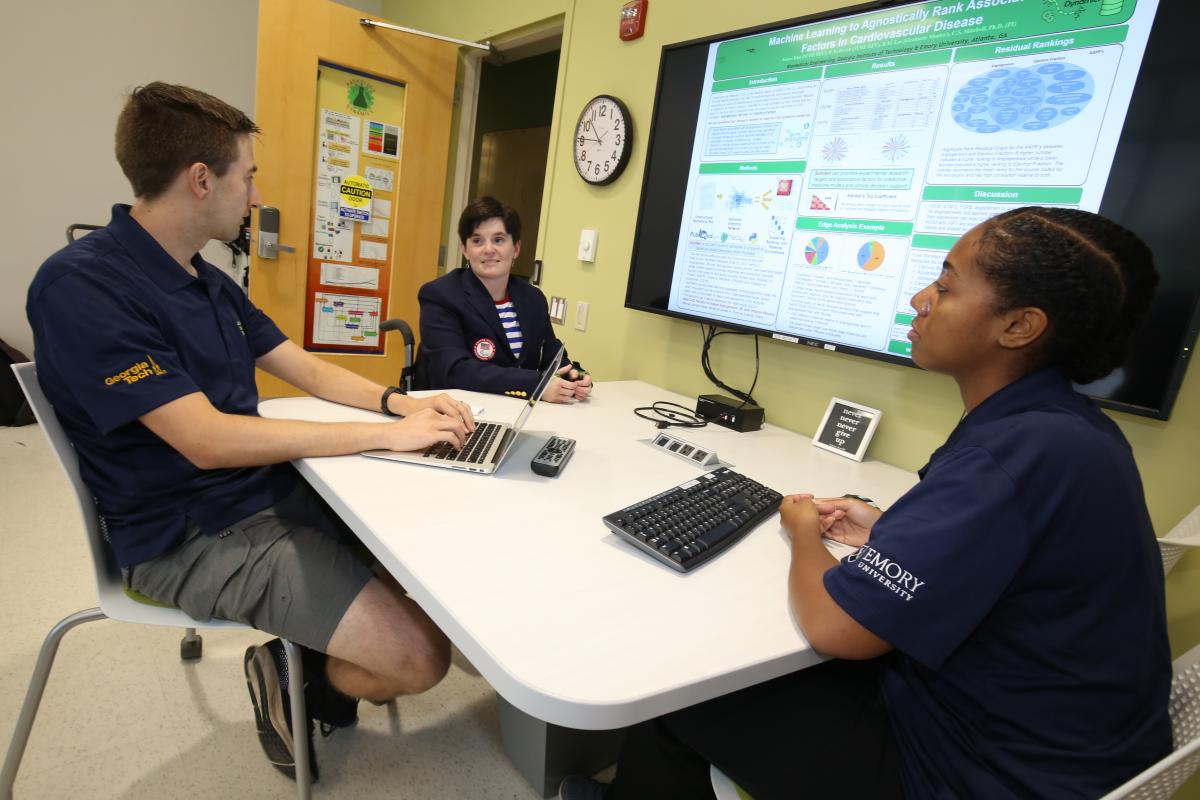 Going for the Gold

While in college, Mitchell was spotted by a coach who took note of her wheelchair agility. He asked if she had ever played wheelchair basketball. Mitchell had played some basketball in high school, but had not yet attempted any sports as a disabled person.

She soon joined Oklahoma State’s team and played for four seasons before the severe progression of her paralysis and vision damage put a stop to her rising basketball career. Still, the time proved crucial to Mitchell both on and off of the court.

“My insurance wouldn’t cover me to go to rehab, so when I left the hospital for the first time I had no idea how to do anything,” said Mitchell.

“All my teammates during this time were amazing. My life had completely changed, but I had zero guidance on how to adapt. It was nice to be surrounded by other people with disabilities who taught me so many tricks and tips.”

She later tried quad rugby, which she dubbed “murderball,” but decided that she needed to play an individual sport. Playing an individual sport would allow Mitchell to simultaneously be an elite Team USA athlete and have a successful research and professional career. Mitchell chose to compete in paracycling and her first love, track and field. 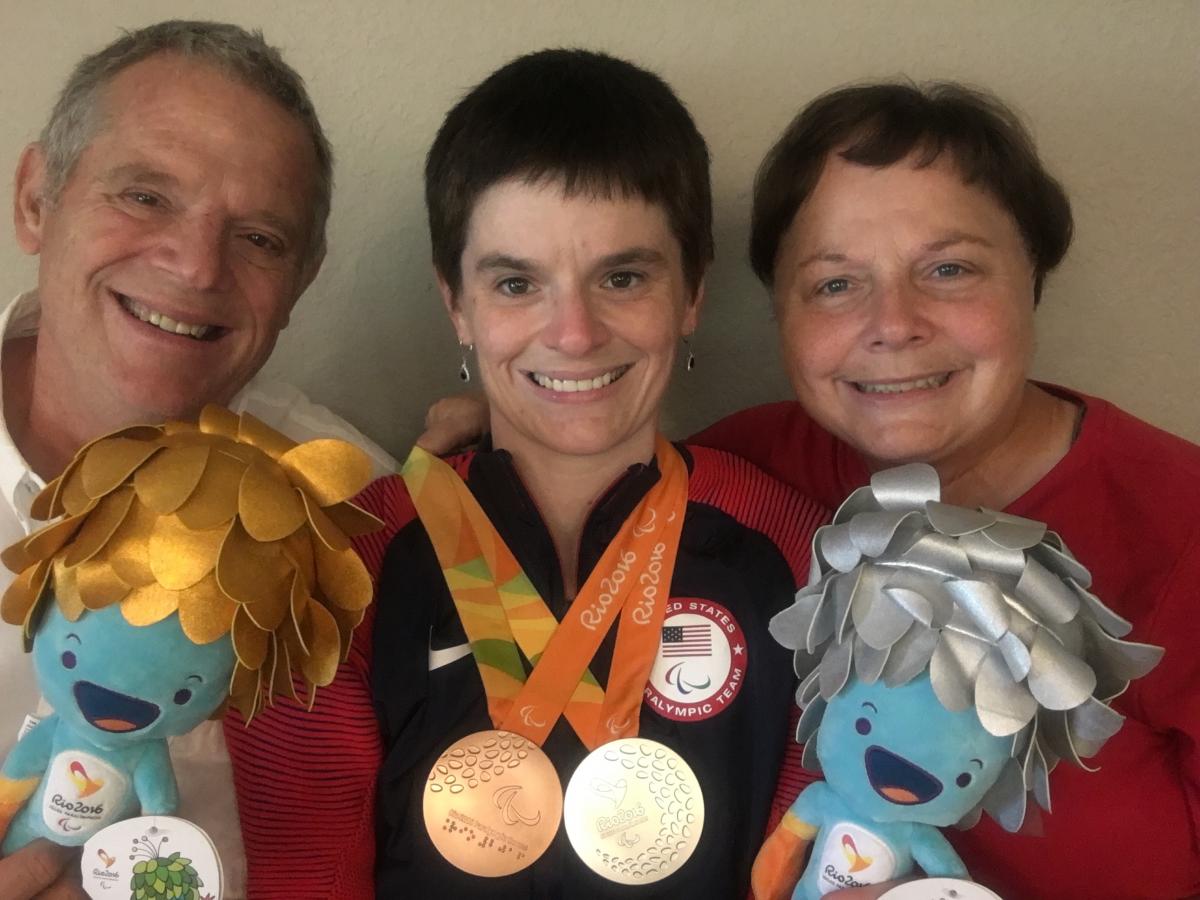 Mitchell with her parents in Rio de Janeiro at the 2016 Paralympic Games after winning a silver and bronze medal.

Unsatisfied with her performance, Mitchell trained hard for the 2016 games. Shortly before the trials, Mitchell was diagnosed with chronic myelogenous leukemia, a rare blood cancer. Despite the diagnosis, Mitchell continued to train and made the team again, all while undergoing chemotherapy. In Rio, she took home a silver and a bronze medal in discus and club throw respectively. She has her eyes set on bringing home a gold in 2020.

While most labs employ graduate students to assist with research, Mitchell made an unusual choice. Her lab mainly consists of undergraduates – sometimes up to 30 – along with a few graduate students.

“People told me I was crazy and could ruin my career by working with so many undergraduates, but the undergrads have been amazing. We now have a great system, and these students are like family to me.” 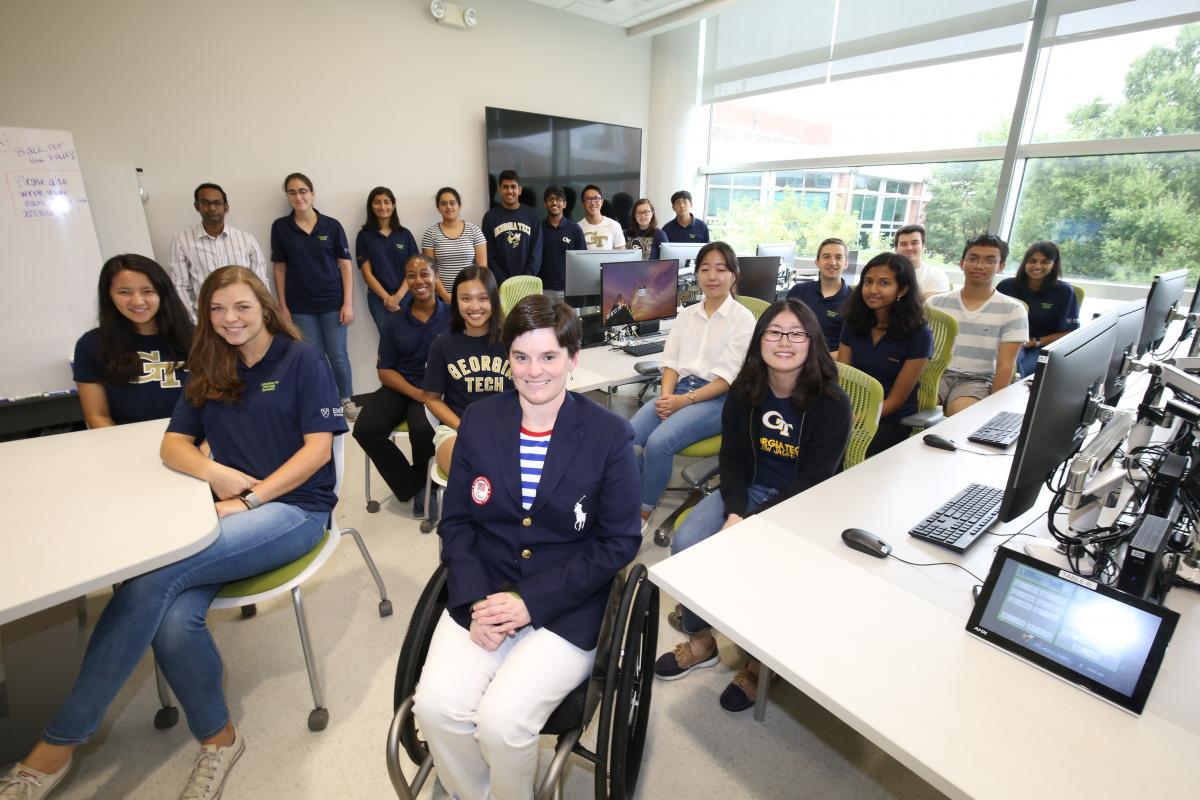 Mitchell and a handful of her 25-plus students make up one of the largest undergraduate labs on campus. Their work combines machine learning algorithms with predictive medicine to help find causes, cures, and better care for diseases like Alzheimer's, Lou Gehrig Disease, and cancer.

“I didn’t want to only do work that helps people 30 years from now. I also want to make people’s lives better right now.”

Because big pharmaceutical companies don’t invest in ALS, Mitchell has spent a significant amount of time dedicated to this disease in particular, allowing her to make a big impact. The lab recently published an article that could change how soon Medicare distributes a certain machine for ALS patients, which could lead to extending their life by more than double.

Another aspect that makes Mitchell’s lab unique is its approach to algorithms. Instead of only developing new algorithms, they also take ones that have been put on a shelf, tune them up, and insert them into the pipeline to solve a biomedical problem.

“We’re more of applied machine learning, where we take pieces of methods, put them together in new ways, and try to solve a big puzzle. It’s challenging because creating a non-biomedical algorithm is hard enough, but add in all of the unpredictable biology and chemistry of the human body, and it gets even more difficult,” said Mitchell.

Always Look for the Good

“I think this campus is long overdue for an accessibility overhaul. There haven’t been a ton of resources out there, and I’ve had so many disabled students come through my door looking for help. Given that we are Georgia Tech, we can do so much to help our students be successful in this environment.”

The alliance was started last spring and will pick up steam this coming academic year.

Mitchell also volunteers as a counselor for people who have undergone similar trauma, including patients at the Shepherd Center Spinal Cord Injury Rehabilitation Hospital.

“I believe we have a choice about everything in our lives. Sure, I wouldn’t pick to be in a wheelchair, but I can choose to see the good in it. It’s a daily choice, and sometimes it’s easy and sometimes it’s hard. I try to help other people realize that the most important thing they can do every day is never give up.”

Photo and Video by Candler Hobbs and Chris Dinh